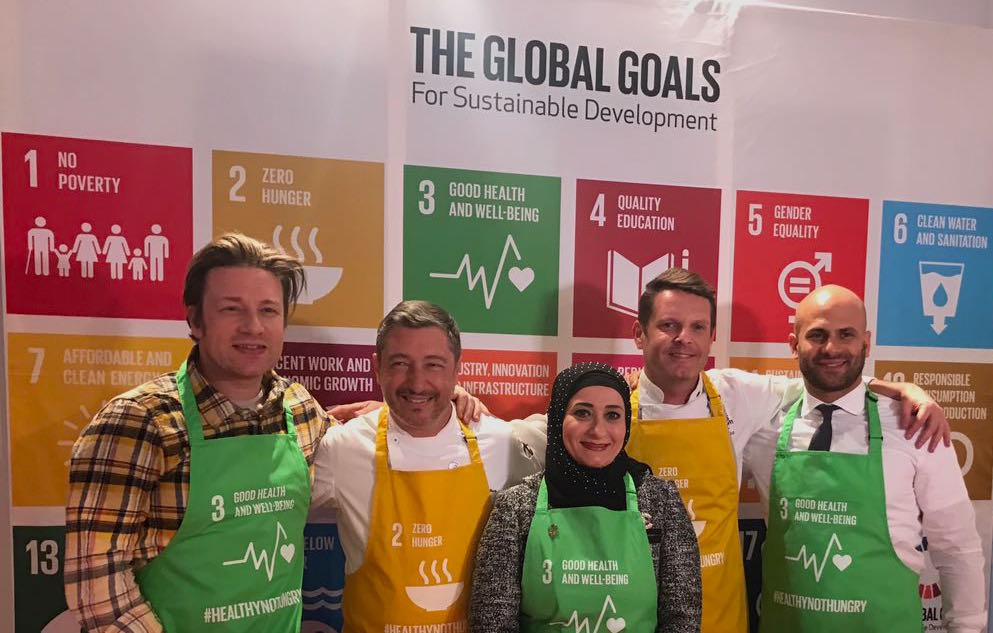 News for 2017 includes launching the Gastronomia Social catering services, the participation of Luis Freire (former Gastromotiva student and resident of Favela da Mare), and the collaboration with Jamie Oliver, Sam Kass, and other big names from the culinary world.

In challenging times full of paradoxes that create technical and social obstacles related to hunger, poverty, malnutrition, and social exclusion, the gathering of the world’s greatest leaders in both public and private sectors was a great opportunity to, once again, prove the will power of Social Gastronomy. Big names of gastronomy participated in our cause, like Jamie Oliver, Sam Kass, Joan Roca, Manal Al Alem, and the Swiss partner Patrick Honauer from Greenabout.

[Read here the summary of actions taken by Gastromotiva in Davos with photos and reports:]

Next to these important partners and so many other spread throughout the world, Gastromotiva is committed to achieve the Objectives of Social Development, determined by ONU, in order to reach zero hunger, good health and lifestyle, quality education, responsible consumption and production, an end to poverty, and jobs in good working conditions resulting in economic growth.

In recent years, Gastromotiva has been building a strong network of chefs and partners throughout the world, creating bridges among public/private sectors and society to create effective connections that deliver measurable results. Therefore, during the World Forum Economics, we declared October 1st as being the international day of Social Gastronomy. Among a deep level of consciousness, we also launched in Davos Gastronomia Social’s Catering service to enhance our goals of combating food waste and developing relationships between people.

CNBC hired us to prepare three lunches in a series called “Taste Without Waste,” and we cooked in a fire pit under open skies and lots of snow. Luis Freire, a former Gastromotiva student and current coordinator of the Refettorio Gastromotiva kitchen and Favela da Mare resident, was invited to participate in the event and was in charge of preparing the dishes alongside chefs David Hertz and Patrick Honauer. All of the dishes were made from leftover ingredients from food markets in Zurich. Two other private dinners were also curated and lectured by David Hertz, including the important “Global Goals Dinner for Healthy not Hungry World,” organized by the World Food Program, Project Everyone, and Unicef.

The participation of Gastromotiva in Davos generated amazing news among the international media and was a standout on the World Forum Economics’ site as one of the six exceptional attractions at the event. See here:

WEF – Under the radar Moments from Davos, 2017
David and Luis cooking in the snow as part of in interview for BBC News
Fortune Magazine interviews CEO of Gastromotiva, Nicola Gryczka[:]