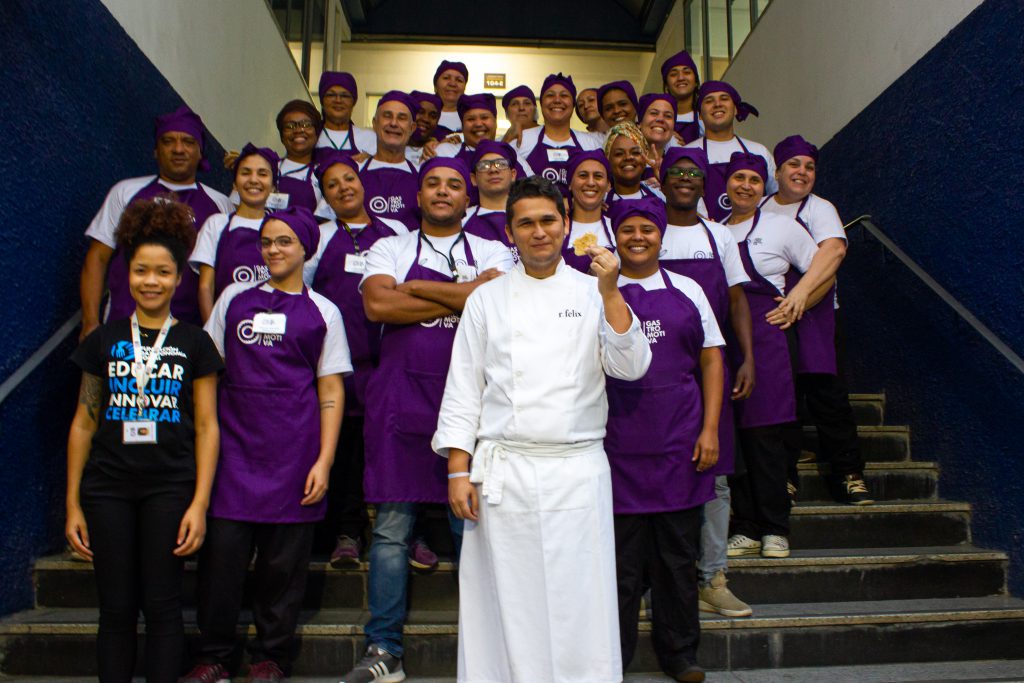 He learned to cook at 20, searching for freedom in his food choices. Ruan Félix’s cuisine doesn’t come from his roots, nor his passions, but rather from a key life decision: becoming a vegan. “I didn’t know how to fry an egg but couldn’t ask anyone to prepare special meals for me, so I just went into the kitchen full steam ahead“ recounts the young man.

Veganism was introduced to Ruan by a passionate friend, who recommended some videos and documentaries. “After seeing the suffering, statistics and arguments, it’s impossible to ignore them.” The decision unleashed a change that went beyond just the food he ate; the already professionally unsatisfied youth fell in love with gastronomy.

Soon after, Ruan decided to look for professional training in the area. “Many vegan cooks work randomly and without any technical foundation, this wasn’t what I wanted. I wanted to know more and understand what was behind my cuisine.” It was then that he discovered Gastromotiva, through another organization – Micro Rainbow, which creates tools and offers opportunities for the LGBT community.

Sexuality is also an important aspect of Ruan’s life, mainly because of his experiences in Magalhães Bastos, a poor neighbourhood on the outskirts of Rio de Janeiro, more than 30 kilometres from the city centre. “I started to understand that what I do isn’t just about a plate of food, behind that plate is a disadvantaged LGBT boy, chasing after someone else’s camera and a setting that doesn’t exist at home, in order to take great pictures and be at the same level as people who already have easy access to it all, easy access to good food and organic produce” recounts Ruan.

Ruan’s work directly reflects his values. At 26, he cooks lunches and dinners as well as teaching classes and putting on events. “I was hired recently to give a lunch without a planned menu in advance. It was then that I realized that nobody is paying for food anymore, but rather, an experience.”

But Ruan’s biggest influence comes from his Instagram account, where he has ten thousand followers who keep track of his recipes and keep up with his day-to-day troubles.  “I had never pictured myself as an educator, but I enjoy it for all that it represents and entails. I manage to show people just like me what is possible, and not in a meritocratic way; I’m just taking on the role of demonstrating to others that this reality exists.”