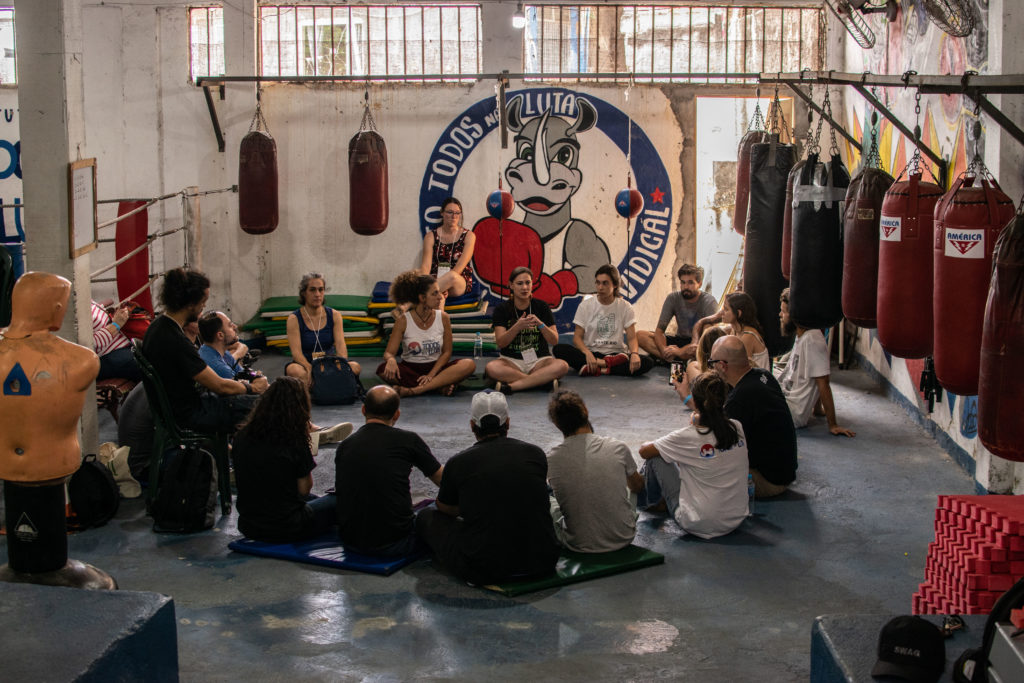 Despite being a touristic point, specially for foreigners, Vidigal is far from being a synomym for
luxury. Located at the southern area of the city, the favela held one of the learning journeys of
the Social Gastronomy Summit Rio last sunday (4 th ). A debate session was held at Todos na
Luta -a NGO that integrates children and youngsters through boxing classes-, in which
members and ambassadors of the Social Gastronomy Movement from around the world
discussed malnutrition in conflict areas.

Júlia Giglio, one of the institute’s founders, explained the project’s routine to the guests and
how the current political and social context affects it. “Besides practicing the sport, the
students have cultural and pedagogical activities, as well as psicological and social assistance.
We look for activities with universal themes, that add value, not for them to become
competitors, but so they can be whatever they want”, says Júlia.

Moreover, the resident talked about the delicate situation in which the community lives when
it comes to eating habits, as it gets compromised because of factors such as poverty, armed
gangs and other types of violence, all present in Vidigal’s territory. According to her, all the 105
students that attend the gym, with ages ranging from 9 to 17 years old, don’t eat there
because the institute doesn’t have the financial conditions to offer it. “The children don’t eat
here because currently we don’t have the money to support the food budget.”

The sport sector, however, is very well established. In the last years, some of the students have
ran in the Olympics Games: in London 2012 and Brazil 2016. Nonetheless, what the incredible
achievement doesn’t show is the struggles the organization goes through with the feeding
issue. “We look favourably to Gastromotiva’s efforts on building a Social Gastronomy network,
because we believe food is one of the most important things in life”, concludes Júlia.

After the debate, the learning journey’s participants gathered with the design for social
sustainability group of Gaia Education to revitalize a living space in the boxing school. The idea
was to expand an area of the institute through bio-building, in order to develop environments
that amplify the local capacity and improve the project’s quality. For the nexts years, the
association plans on building a kitchen, a patio and a kitchen garden, so they can, in this
scenario of vulnerability and conflict, improve the reality of these youngster in Vidigal.