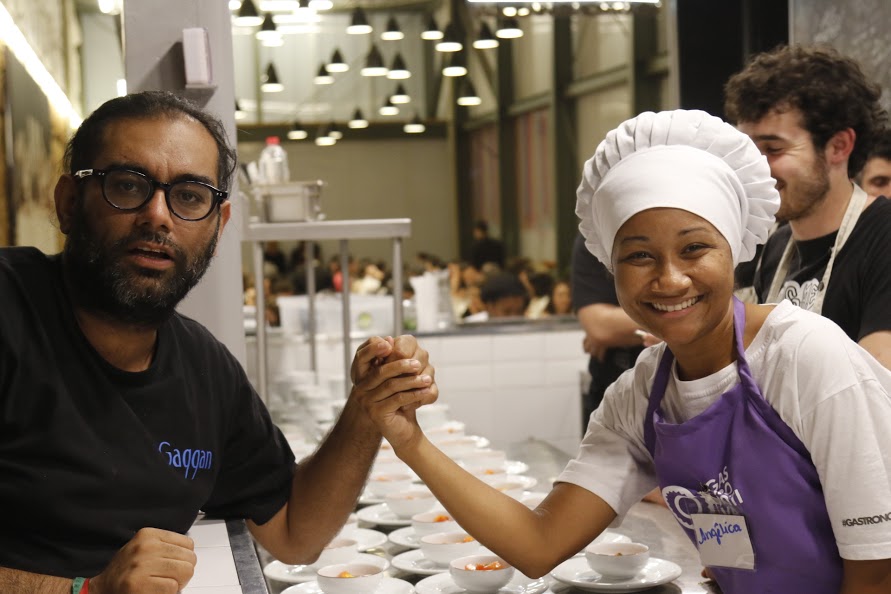 On November 1st, Gaggan Anand, elected for three consecutive years the best chef in Asia, cooked at Refettorio Gastromotiva for 160 people. He arrived at the headquarters of the project in the morning accompanied by 4 cooks of his team and was hosted by the team Gastromotiva and by Ale Forbes, co-founder of Refettorio.

After setting the menu to be served, it was time to cook. Gaggan Anand and David Hertz co-ordinated their teams to prepare dinner with Indian and Brazilian tones, a wonderful mix of flavors and seasonings.

Throughout the day, the Indian chef interacted with the students of Gastromotiva, exchanged experiences and inspired them to follow a path of success in gastronomy.

At night, dinner was first served to 90 elderly, teenagers and children in conditions of socioeconomic vulnerability. Then the same menu was offered to 70 people attending a fundraising dinner. In fact, the success of the event was guaranteed since the launch: the tickets sold out in less than 24 hours.

The international press accompanied Gaggan Anand’s visit to the Refettorio. Since then, dinner has been reported in England (Reuters), Germany (Spiegel) and Portugal (Euronews). In Brazil, Gastromotiva articulated his interview to the column of the newspaper O Globo called “Tell me something that I do not know”, that will be published soon.

To learn more about the trajectory and work of Gaggan Anand, watch the 6th episode of Season 2 of the Chef’s Table series on Netflix.